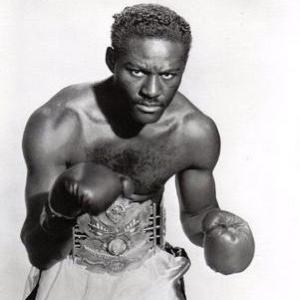 Ezzard Charles, also known as “The Cincinnati Cobra,” was a quiet, modest individual who went on to become a relatively unheralded world heavyweight champion. Born in Lawrenceville, Georgia on July 7, 1921, Ezzard moved to Cincinnati at the age of nine to live with his grandmother. He began boxing as an amateur in his teens and won the AAU National middleweight title in 1939. He turned professional in March of 1940. His early bouts were against the top middleweights and light heavyweights in the world. A clever boxer, over the course of his professional career he defeated many of boxing’s greatest fighters including Charley Burley, Joey Maxim, Archie Moore (three times), “Jersey” Joe Walcott, Gus Lesnevich, and Joe Louis.

His professional career was interrupted for two years in 1944 and 1945 when he served a stint in the army during World War II.  Upon the completion of his service he returned to boxing in 1946 and defeated Archie Moore, Lloyd Marshall, and Jimmy Bivins to earn a number two ranking in the light heavyweight class. He fought a total of five light heavyweight champions, defeating four of them, but never received an opportunity to fight for the division’s title. Despite this, many consider him one of the greatest light heavyweight fighters of all time on the basis of his record in that weight class.

After Joe Louis retired from the ring the first time, Charles fought for the vacant National Boxing Association heavyweight title on June 22, 1949 against “Jersey” Joe Walcott and earned a 15-round decision victory. The next year Louis came out of retirement and Charles defeated him on September 27, 1950, gaining recognition as the undisputed world heavyweight champion. He successfully defended the title three times before losing it to Walcott on July 18, 1951.

Charles later challenged heavyweight champion Rocky Marciano, losing twice, the first time in June of 1954 in a close 15-round decision. Marciano later referred to their first meeting as one of the toughest fights he ever had. It was the only time a fighter ever lasted a full 15 rounds against the “Brockton Blockbuster.” Charles was knocked out in the eighth round of their second meeting in an exciting contest that was recognized as the fight of the year.

He retired from the ring in late 1956, but financial problems forced him to come out of retirement and fight two more years in 1958 and 1959. He lost 12 of his final decisions, bringing his overall record to 89 wins, 25 losses, and 1 draw. In 1966, Ezzard Mack Charles was diagnosed with Amyotrophic Lateral Sclerosis (ALS), “Lou Gehrig’s disease.” He died from the disease in 1975, shortly before his 54th birthday.  He was subsequently elected to the International Boxing Hall of Fame in 1990.

On This Day: Ezzard Charles Scores Explosive 2nd Round KO of Bernie Reynolds

On This Day: Ezzard Charles Scores Explosive 2nd Round KO of Bernie Reynolds

Charles, the former heavyweight champion of the world, was coming off back-to-back defeats to Jersey Joe Walcott and Rex Layne

The park and statue will be dedicated Saturday, Oct. 1 during the fifth annual Ezz Fest, an arts, athletics and music festival than honors Charles