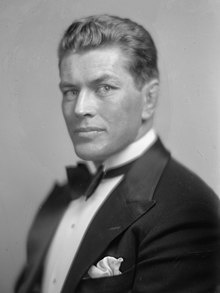 Considered one of the giants of sports in the 1920s, Gene Tunney became heavyweight boxing champion of the world when he defeated Jack Dempsey in 1926. In a rematch with Dempsey in 1927, Tunney held on to his title in the hotly debated "battle of the long count," in which Tunney got the benefit of an extra long count when the referee, following standard boxing rules, refused to start the count until Dempsey returned to his corner. Known for his dispassionate, "scientific" boxing style, which involved a careful study of his opponents before he encountered them, Tunney suffered only one defeat in his career as a professional boxer. He was also the first heavyweight champion to retire as champion and not risk a comeback.

Gene Tunney was born James Joseph Tunney to a working class Irish Catholic family in New York City. His father worked as a longshoreman, loading and unloading freighter cargo at New York harbor, and was a fan of boxing. An amateur boxer, Tunney's father fought in matches at Owney Geaghan's boxing club on the Bowery. The young Tunney got into fights in the streets of his Greenwich Village neighborhood as a boy, and his father gave him a pair of boxing gloves for his tenth birthday in the hopes that he would learn to properly defend himself.

At fifteen years of age, Tunney dropped out of school and got a job as an office boy at the Ocean Steamship Company, earning five dollars a week. He moved up to mail clerk, more than doubling his pay to eleven dollars a week, and from there was promoted to freight classifier, bringing in seventeen dollars a week. During breaks, Tunney sparred with any of his office mates who were willing, shoving desks and filing cabinets aside to form a makeshift ring. In the evenings, Tunney further honed his boxing skills at the Greenwich Village Athletic Club.

In 1915, fresh out of his teens, Tunney became a professional boxer. This was when he fought his first professional match, against an accomplished young boxer named Bobby Dawson. Tunney's seven-round knockout of Dawson earned him eighteen dollars—more than his weekly pay at the steamship company, and it left him with a taste for more.

First North America, Then The World

After the United States entered World War I in 1917, Tunney joined the Marines and was stationed in France. While there, he fought in the American Expeditionary Force light heavyweight championship and won. He continued his civilian boxing career on his return from Europe, moving up the ranks to defeat successively more powerful opponents. Finally, in 1922, Tunney defeated Battling Levinsky in twelve rounds to take the title of light heavyweight boxing champion of North America.

Tunney's success was short lived. Only months later, he was forced to defend his title against Harry Greb, a highly aggressive boxer who was known for intimidating his opponents with unusually savage attacks. Greb gave no quarter to Tunney in their match, pounding away at the champion for fifteen rounds, and using a number of tactics that were on the borderline of legality. Tunney put up a heroic defense, managing to stay on his feet with a broken nose Greb gave him by head-butting him, and with his eyes swollen almost shut, until the fight was ended with Greb the winner by decision.

But Tunney made a comeback the following year, 1923, challenging Greb to a rematch. This fight also went a full fifteen rounds before being called in a decision. This time, however, it was Tunney who got the upper hand. He had taken the advice of a boxing tactician, Benny Leonard, who had advised him to keep Greb off balance with as many punches to the body as he could manage. The strategy paid off, and Tunney took back his North American light heavyweight title.

Tunney now had his ultimate goal in sight: the title of heavyweight boxing champion of the world. This title was held by Jack Dempsey, and the two squared off on September 23, 1926. The match was held at Philadelphia's Sesquicentennial Stadium. This site had been chosen because Dempsey had been banned from fighting in New York because he had refused to accept a challenge from African-American boxer Harry Wills.

Tunney had trained hard for his fight against Dempsey, watching films of the champion in action over and over again, probing for weaknesses. He also enlisted the aid of boxers who had fought Dempsey, both opponents and former sparring partners. Brought to Tunney's training camp, these fighters gave Tunney access to a pool of expert knowledge on Dempsey's fighting strengths and weaknesses from which to draw in the formation of his own strategies. He also drew on his own experience gained during his then-seventy-seven professional bouts, only one of which he had lost.

On the day of the fight, the stadium was jammed with more than 120,000 spectators who shelled out a combined two million dollars to see the championship bout. Tunney's meticulous study of his adversary paid off. He came on strong in the first round, rocking Dempsey with a hard right to the face and then keeping him off balance for the remainder of the bout, until the fight was called in Tunney's favor after ten rounds. It was the first time that anyone had won a heavyweight championship in a decision rather than a knockout.

The "Battle Of The Long Count"

A year later, almost to the day, on September 22, 1927, Tunney and Dempsey met in a rematch. This time the venue was Soldier Field in Chicago, Illinois. Once again, more than 100,000 fans mobbed the grounds, paying a record $2.6 million to see the match (some sources say the box office take was more than $4.6 million). This fight was also the first to be covered by a professional radio announcer. Tunney and Dempsey slugged it out for the first six rounds, with neither boxer gaining a serious advantage, although Tunney managed to stay ahead in points.

Then, in the seventh round, Dempsey dealt Tunney a staggering right to the temple and quickly pressed the attack with a fury of blows. Tunney went down. Dempsey, caught up in the heat of the moment, failed to promptly retire to his corner of the ring so that the count could start. The referee pleaded with Dempsey to stop hovering over Tunney so that he could start the count, and finally Dempsey yielded.

Getting Dempsey to move took all of four or five seconds, but those extra few moments were all Tunney needed to recover. As one of the spectators, sports writer Shirley Povich wrote fifty-one years later in the Washington Post, "I was positive then, as now, that Tunney would not have been up at a proper count of ten, but those precious seconds were heaven-sent for him, and at nine he made a gutsy rise to his feet." The fight was allowed to continue. Tunney managed to avoid Dempsey for the remainder of the round, buying himself even more time to recover. Maintaining his point lead for the remainder of the bout, Tunney won the match by decision in the 10th round.

Many fans felt that an injustice had been done, that Dempsey should have won the fight in that fateful seventh round. Povich recalled that there were "more cheers for Dempsey in that one round than for Tunney in the eight he won in the 10-round fight." The fight came to be known in boxing lore as the "battle of the long count."

Undefeated To The End

Tunney defended his title once more before hanging up his gloves for good. This was in a match with Tom Heeney in New York City on July 26, 1928. Tunney won that match after ten rounds in a technical knockout, allowing him to retire undefeated, the first heavyweight champion to do so.

Gene Tunney should have been the living portrait of the certified American hero. He was the young handsome stalwart fighting Marine of World War I, square-jawed and fearless….

But complete admiration escaped Tunney. The flaws were two. He was the man who beat a popular idol when he twice destroyed Dempsey. And … he lacked the common touch, choosing to hang out with scholars.

Tunney led a full and active life following his retirement from boxing. He married Mary Josephine ("Polly") Lauder, niece of a steel baron Andrew Carnegie on October 3, 1928, and then started what was to be a lucrative career in business. After the United States entered World War II in 1942, Tunney served in the U. S. Navy. On his return from the war, he returned to his business career, seeking to remain out of the public eye for much of the remainder of his life. In 1945, he contributed an entry on boxing for the Encyclopedia Britannica, and in the 1950s and 1960s, he joined forces with his friend Jack Dempsey to argue before congress for the creation of a national commission that would oversee boxing.

Known for his intellect and appreciation for literature, Tunney befriended noted author and sportsman Ernest Hemingway as well as renown playwright and boxing fan George Bernard Shaw. He himself penned three books, Boxing and Training, A Man Must Fight, and Arms for Living. Tunney had four children, one of whom, John Varick Tunney, went on to become a member of the United States Senate representing California. Tunney died in 1978 at the age of eighty.

What if Gene Tunney Did Not Retire Post-Dempsey?

What if Gene Tunney Did Not Retire Post-Dempsey?

From 1930-1937, five men held the Heavyweight Championship, and none held onto the title for more than two years

Gene Tunney passed away on this day 44 years ago

Gene Tunney passed away on this day 44 years ago

He was superb technical fighter with a short-lived reign in the golden era of boxing, defeating one of the greatest heavyweight Champions of all time

The famed Heavyweight Champion who carried boxing gloves in his gym bag, along with the works of Shakespeare, F Scott Fitzgerald and other literary giants