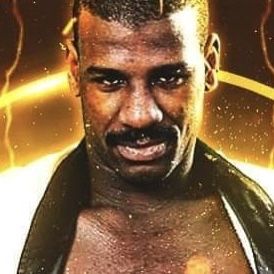 Michael Spinks (born July 13, 1956)[a] is an American former professional boxer who competed from 1977 to 1988. He held world championships in two weight classes, including the undisputed light heavyweight title from 1983 to 1985, and the lineal heavyweight title from 1985 to 1988. As an amateur he won a gold medal in the middleweight division at the 1976 Summer Olympics.

Nicknamed "Jinx", which spawned the nickname of his straight right hand, "The Spinks Jinx"‍ Spinks is the brother of former world heavyweight champion Leon Spinks, and uncle of Cory Spinks, a former welterweight and light middleweight champion.

After a successful amateur career, which culminated in his Olympic gold medal win, Spinks went undefeated in his first 31 professional fights, beating Dwight Muhammad Qawi, Eddie Mustafa Muhammad, Marvin Johnson and Eddie Davis en route to becoming the undisputed light heavyweight champion. After defending the title against 10 different fighters, Spinks moved up to heavyweight, and as an underdog defeated long-reigning IBF heavyweight champion Larry Holmes (whose own 48–0 record up to that point was one victory short of tying Rocky Marciano's 49–0 unblemished record); in doing so, Spinks became the first reigning light heavyweight world champion to win the heavyweight title. In his final fight, Spinks was knocked out by Mike Tyson in 91 seconds, the only defeat of his professional career.