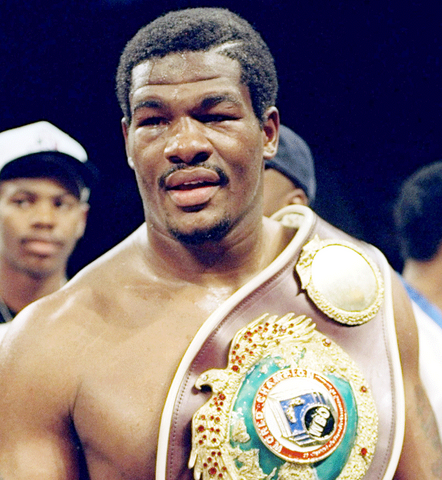 From the tough Brownsville area of Brooklyn, New York, Riddick Bowe won four New York Golden Gloves title in the mid-eighties. He also represented the USA at the World Junior Championships in 1985, where he took the gold medal, and won a bronze the 1987 Pan American Games in Indianapolis. Selected to compete for the USA in Seoul he reached the final only to be stopped by Canada’s Lennox Lewis in the 2nd round of their contest.

Bowe turned professional after the Games and by 1992 had ran up thirty-one straight wins to earn the status of #1 contender to the world heavyweight title. In November 1992 in Las Vegas, he outpointed the previously unbeaten Evander Holyfield to become the undisputed heavyweight champion. After two routine defences Bowe met Holyfield again and lost his title in a fight memorable for the landing of a parachutist on the ring apron. After a series of fights which saw Bowe win and defend the WBO version of the world title he met Holyfield for a third time and defeated his old rival on an eight round stoppage. Struggling to control his weight, he was 15kg heavier for the next fight against Andrzej Gołota and struggled against his Polish opponent. Golota was leading on points when he was disqualified for a series of low blows. After the fight a riot broke out in which spectators and policemen were injured.

A rematch in which Golota was again disqualified proved to be Bowe’s last before retirement. His next move was to join the US Marines but he left after completing a week of basic training. In 2000 he was convicted on kidnapping his estranged wife and children and sentenced to just 30 days in jail after his defence claimed he had suffered brain damage from his boxing career. This sentence was later put aside and Bowe was re-sentenced to 18 months in jail. After his release in 2004, he was able to get his boxing licence returned and he won two more fights albeit unimpressively. Bowe was declared bankrupt in 2005.

Riddick Bowe has revealed how he ranks the three other great heavyweights of his era: Mike Tyson, Lennox Lewis and Evander Holyfield.

Holyfield vs. Bowe: A Heavyweight Trilogy for the Ages

Holyfield vs. Bowe: A Heavyweight Trilogy for the Ages

There was no arguing that Bowe had physical advantages. But many people in the boxing world had questioned Riddick’s heart and will to win.

He would spend ten years out of boxing before making one of the most revered comebacks of all time, winning the title 20 years after losing it