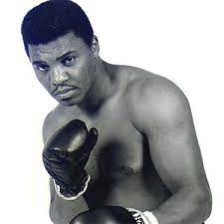 Jimmy Young (November 14, 1948 – February 20, 2005) was an American heavyweight professional boxer. Young was known for his awkward, defensive style and counterpunching. He had his greatest success during the mid-1970s, most notably earning a victory over George Foreman in 1977 and losing a unanimous decision against Muhammad Ali. Young fought many significant fighters of his era, including twice outpointing Ron Lyle and losing only by a split decision to then-number one contender Ken Norton in a title eliminator in late 1977.