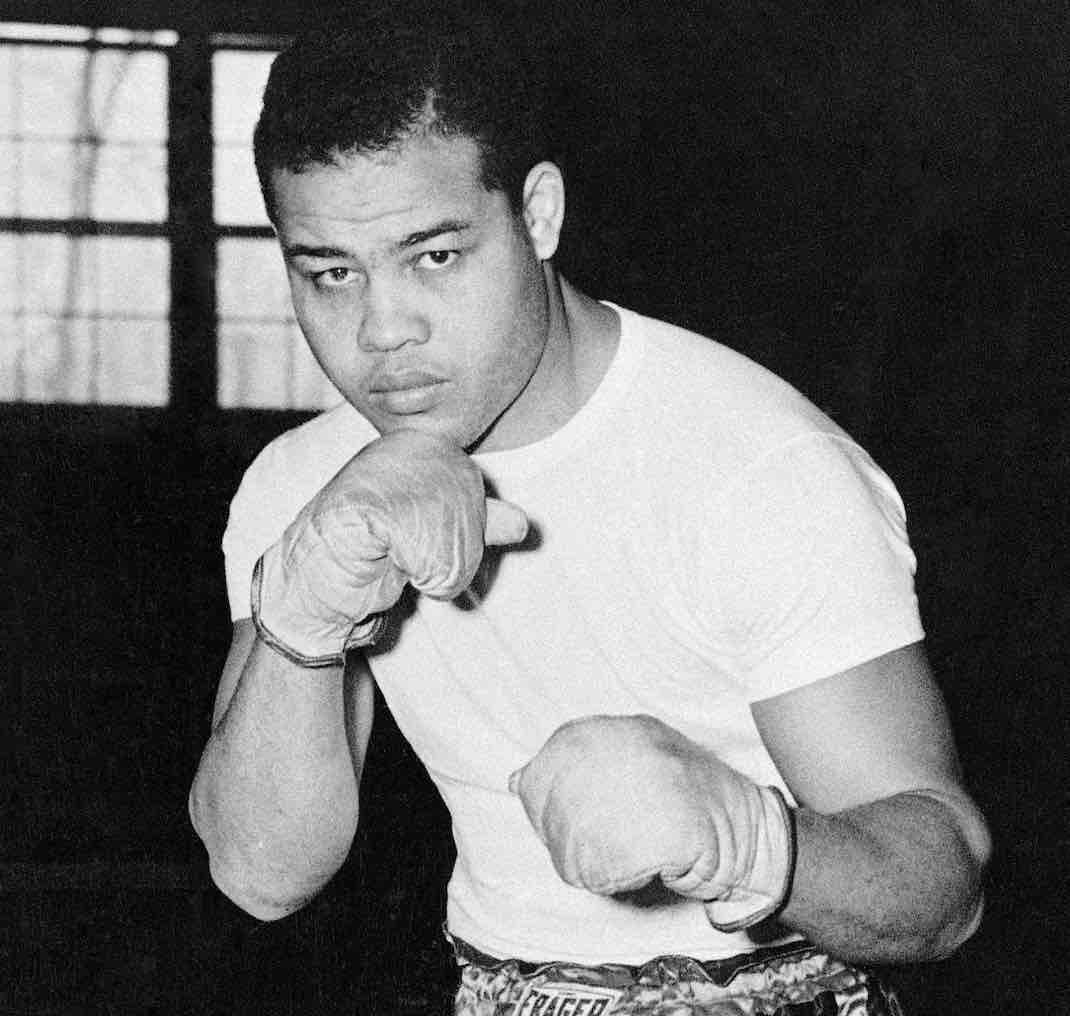 Joe Louis burst onto the professional boxing scene in 1934 with more style and skill than the boxing world had ever seen. Known to many as the “Brown Bomber,” Louis emerged victorious from his first 27 fights, all but four of which he won in knockouts. In the early days of his career, he destroyed such great heavyweight fighters as Stanley Poreda, Natie Brown, and Rosco Toles. It was here that Louis delivered to the entire world a premonition of the reign of domination that he was to begin.

Joe Louis Barrow was born on May 13, 1914. His father, “Mun Barrow,” was a cotton picker from Alabama and his family fought with poverty for most of his childhood. His family moved to Detroit in 1924, at which point Joe first became involved in boxing. Having grown up in the Old South, Louis had acquired the instinct and anger of a true fighter, even amidst the evils of racial discrimination and intolerance. His early career was a period of hard work and determination, and was one without glamour or fame. 10 years after his arrival in Detroit, Louis won the Golden Gloves as a light heavyweight. Following this win, Louis turned professional and won twelve contests within the first year. The first few years of Louis’ pro career involved a steady ascension up the pyramid of the Heavyweight class. His boxing prowess, as well as his reputation, was growing at an incredible rate. In June of 1935, he fought Primo Carnera, the former heavyweight champion, before a Yankee Stadium crowd of 62,000. Louis followed this fight with a pairing against Max Baer, who he defeated by knockout in the fourth round. Ernest Hemingway described this fight as “the most disgusting public spectacle outside of a public hanging” that he had ever seen.

Joe Louis was seemingly invincible, until his meeting with Max Schmeling on June 19, 1936. Schmeling was the underdog but, to the surprise of all, gave Louis a defeat that would continue to sting long after the cuts had healed. Louis was counted out in the 12th round of this lengthy fight and suffered the first and most painful defeat of his boxing career. In 1937, Louis faced world heavyweight champion James J. Braddock in Chicago. In an eight round match, Louis captured the heavyweight title of the world by knocking Braddock out. After this victory, Louis stated, “I don’t want nobody to call me champ until I beat Schmeling.” Louis had ascended to the top of the boxing world, but in his estimate his journey was far from complete. His embarrassing loss to Max Schmeling was the only dark spot on a career that was otherwise the stuff of dreams, and he was consumed by a desire for revenge.

Following this successful title defense against Welsh boxer Tommy Farr in a 15-round marathon match, Louis initiated his “Bum of the Month” campaign. The idea was for Louis to take on a variety of fighters, whether they were contenders or not.

During this period, on the day of June 22, 1938, Louis once again took on the only opponent who had ever beaten him, Max Schmeling. This time around, Louis knocked Schmeling out and captured the admiration of countless Americans. Louis gained a moral victory for himself and for his country, and simultaneously struck a damaging blow to Hitler and his pretentious beliefs.

Louis’ first punches, a pair of powerful left hooks, began his opponent’s eventual demise. Schmeling complained bitterly about being hit with foul kidney punches, but every punch was a fair one. The fight was nothing short of ridiculous, with Schmeling falling to the floor in just two minutes and four seconds.

It was this time period that bore witness to Louis’ reign of terror in the heavyweight boxing world. Beginning in 1937, he began a 12-year reign as boxing’s heavyweight champion of the world. During this stretch, Louis had victories over Lou Nova, Tony Galento, Gus Dorazio, Buddy Baer, and Johnny Paycheck. Louis’ epic battle with Billy Conn at the Polo Grounds also occurred during this time. In 1942, Joe Louis began a period of service in the Army and worked as a physical education teacher. It would be four years before Louis again returned to the ring. Between 1946 and 1949, Louis flawlessly defended his title four times, including two victorious fights against ‘Jersey’ Joe Walcott.

Louis retired in 1949, still the undefeated heavyweight champ. Succumbing to financial pressures and government debts, Louis was forced back into the ring. In 1950, he attempted to recapture his title in a bout against Ezzard Charles. However, in a points decision, Louis was handed a loss. Not ready to accept defeat, he again tried his hand in 1951 against Rocky Marciano. During this unsuccessful return to the ring, Marciano knocked Louis through the ropes in the 8th round. This was Joe Louis’ final time in the ring. He had earned $5 million in his illustrious boxing career. But at 37, Joe Louis had not a single cent to show for it. To support himself, Louis decided to make a living as a Las Vegas casino host.

Joe Louis still holds the distinction of having successfully defended his title more times than any other heavyweight in history. He knocked out five world champions and will remain a powerful part of boxing history for many decades to come. His life and success story serve as proof that black and white Americans can coexist. Joe Louis is a role model for all of us and proved that good sportsmanship can exist even in a sport as violent as boxing. When he died in 1981, Joe Louis was eulogized – and continues to be known – as one of the greatest prizefighters of all time.

Blackburn had the perfect fighting machine in Louis, but the Brown Bomber needed time to get his engine warmed up to throwing his dynamite

Joe Louis still stands as one of the most legendary and iconic names in boxing history. This week, we look back at four of his fights.

More than Fists: The Stories of Joe Louis & Jack Johnson

More than Fists: The Stories of Joe Louis & Jack Johnson

Heavyweight Champions during a time when boxing was second only to baseball in terms of national popularity in the US.