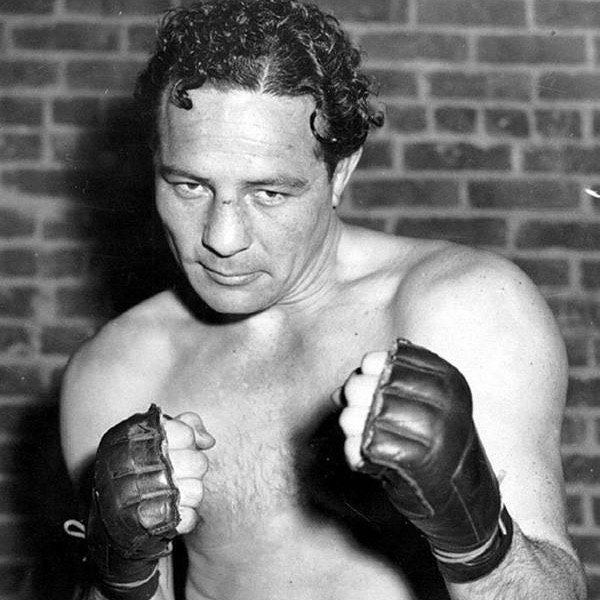 Possessing perhaps the most powerful right hand in heavyweight history, Max Baer was a flashy performer who wise-cracked and clowned his way through his career. Although he never fully realized his tremendous potential, Baer won the heavyweight title, and his showmanship entertained an America rocked by the Great Depression. Born in Omaha, Baer moved with his family to Colorado and then to California. He dropped out of school after eighth grade to work with his father on a cattle ranch, where he built his great physical strength doing range work.

Early in his career, Baer trained with a zeal he did not demonstrate later. He turned pro in 1929 and won 22 of his first 24 fights, nine with first-round knockouts. Baer was in supreme condition and dangerous in the ring. In 1930, he was charged with manslaughter when Frankie Campbell, brother of baseball player Dolph Camilli, died as a result of a Baer knockout. Ultimately cleared of criminal charges, Baer was suspended from fighting in California for a year.

Baer quit boxing for several months after Campbell's death, then lost four of his next six fights, partly because of his reluctance to go on the attack. One victor, Hall of Famer Tommy Loughran, told Baer that he was looping and telegraphing his punches. Jack Dempsey helped Baer shorten his punches and took an interest in him for the rest of his career. In 1932, Baer knocked Ernie Schaaf unconscious in the tenth round of what had been a fairly even fight. Not long after, Schaaf died following a bout with Primo Carnera. The death was attributed in part to the beating administered by Baer.

In 1933, in the best fight of his career, Baer beat Max Schmeling at Yankee Stadium before 60,000 fans. Baer hammered Schmeling so thoroughly, referee Arthur Donovan stopped the fight in the tenth round. Now in line for the world heavyweight title, Baer fought Primo Carnera in 1934. At the Madison Square Garden Bowl, before a throng of 50,000, Baer knocked the giant Carnera down eleven times in eleven rounds.

‍
Baer was now at the height of his fame. He starred in a movie, The Prizefighter and the Lady (banned in Germany because Baer's grandfather was Jewish), and lived the high life. He was romantically linked to innumerable starlets, socialites, chorus girls, and Broadway actresses before marrying in 1935.

Baer frittered away the title to James J. Braddock in his first defense. He fought with an injured right hand, and his half-hearted, joking effort lost him the fifteen-round decision. He had been champion for a year. Three months later, Joe Louis demolished Baer in four rounds.

Baer continued to fight for another six years, compiling a record of 30-4 in that time. In retirement, Baer acted, had a successful nightclub act both individually and with "Slapsie" Maxie Rosenbloom, and refereed boxing and wrestling matches. Baer's son, Max Jr., became famous in his own right for playing the role of Jethro Bodine in the long-running television comedy series, The Beverly Hillbillies.

Max Baer died on a day like today, 63 years ago.

Max Baer died on a day like today, 63 years ago.

One of the hardest-punching heavyweights in one of the division’s golden eras, and a colorful character outside the ring.