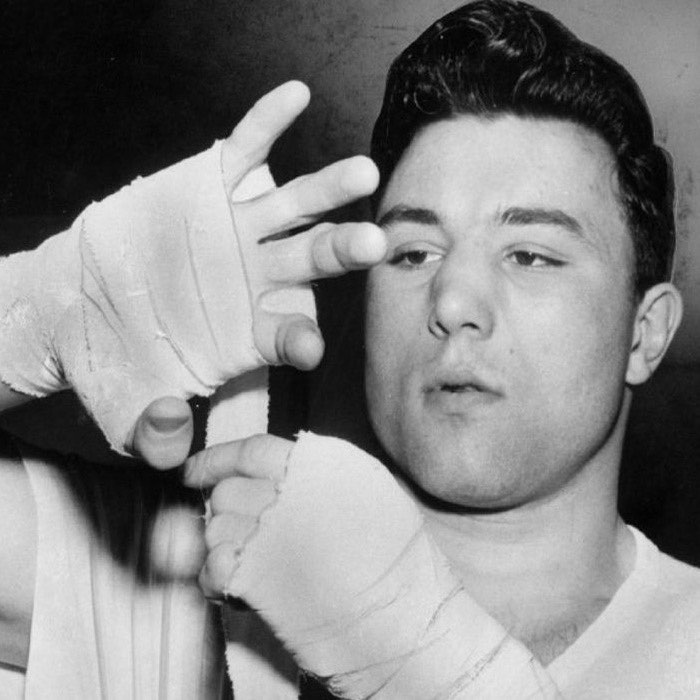 George Chuvalo, CM, O.Ont, boxer (born 12 September 1937 in Toronto, ON). George Chuvalo is a three-time Canadian heavyweight champion boxer. He is perhaps best known for his full 15-round bout with world heavyweight champion Muhammad Ali at Maple Leaf Gardens on 29 March 1966. Ali famously called Chuvalo “the toughest guy I ever fought.” Chuvalo posted a career record of 73-18-2, with 64 wins by knockout. He has also served as a prominent anti-drug advocate after losing two sons to drug overdoses and his wife and another son to suicide. A Member of the Order of Canada and the Order of Ontario, Chuvalo has been inducted into Canada’s Sports Hall of Fame, the World Boxing Hall of Fame, the Ontario Sports Hall of Fame and Canada’s Walk of Fame.

The son of Croatian immigrants Stipen and Katica, George Chuvalo grew up in Toronto’s working class Junction neighbourhood. His father worked in meat-packing plants and his mother plucked chickens to earn a living. From his humble upbringing, Chuvalo took toboxing from an early age. He trained at the nearby St. Mary’s Polish Roman Catholic Church and eventually fought out of the Earlscourt Athletic Club.

His skill and power were evident from the beginning. The teenager packed a powerful punch that would become his calling card. As an amateur, he won 12 of his 18 fights by knockout in the first four rounds. Famously, 64 of his 73 professional victories came by knockout.

At age 17 and standing six feet tall, the bull-necked, iron-jawed Chuvalo delivered a first-round KO to Peter Piper at a tournament in Regina, Saskatchewan, to claim the Canadian Amateur Heavyweight title. He received an offer to represent Canada at the Olympic Summer Games but instead turned professional to support his family.

Chuvalo made his professional boxing debut on 24 April 1956 at an elimination tournament. It was sponsored by legendary pugilist and former world heavyweight champion Jack Dempsey. Chuvalo fought in four matches that evening, winning all of them by knockout in a combined total time of twelve minutes and thirty-six seconds.

On 15 September 1958, Chuvalo became the Canadian heavyweight champion at age 19. He knocked out James J. Parker in the first round at Maple Leaf Gardens. His title defence included a high-profile victory over Acadian boxing icon Yvon Durrelle. Chuvalo then lost the belt to Bob Cleroux by a split decision on 17 August 1960 at Montreal’s Delorimier Stadium. His next bout was a much-anticipated rematch with Cleroux at the Forum in which Chuvalo regained the Canadian heavyweight championship.

The two competed in a trilogy match in Montreal on 8 August 1961, and Chuvalo dropped the belt to Cleroux once more via split decision. After Chuvalo was disqualified from his next match after headbutting his opponent, he stepped away from the ring altogether. He retired from boxing to pursue a career as a car salesman.

He returned to the ring two years later. On 18 March 1964, he became the Canadian heavyweight champion for the third time after knocking out Hugh Mercier in Regina.

Chuvalo held on to the title for the next 14 years until his retirement in 1978 at the age of 41. His final match took place at St. Lawrence Market in Toronto. Fittingly, it ended in a technical knockout (TKO) after three rounds. He posted a career record of 73-18-2.

As his notoriety grew in Canada, Chuvalo earned his way to a handful of matches against some of the most accomplished boxers in the history of the sport, including five world champions.

On 1 February 1965, Chuvalo fought Floyd Patterson at Madison Square Garden in New York City. The two heavyweights fought the full 12 rounds, and when the final bell rang Patterson was named the victor by unanimous decision. Ring Magazine named the match the Fight of the Year.

In November 1965, Chuvalo took on World Boxing Association heavyweight champion Ernie Terrell in front of a hometown crowd at Maple Leaf Gardens. Chuvalo once again went the distance but lost.

Next came his most famous match, again in front of his hometown faithful, who came out in droves to watch Chuvalo take on then-undefeated world champion Muhammad Ali on 29 March 1966. Although he did not win the fight, Chuvalo earned hero status by going toe-to-toe with the 24-year-old Ali for the full 15 rounds. The two exchanged heavy blows, but Chuvalo stood his ground. The judges awarded the match to Ali, but Chuvalo only bolstered his reputation.

“He’s the toughest guy I ever fought,” Ali said of Chuvalo. The two had a rematch in 1972 in Vancouver, which once again went the distance. Chuvalo’s star-studded list of opponents also included world heavyweight champions George Foreman and Joe Frazier.

Yet Chuvalo has said that his 1968 bout versus Manuel Ramos at Madison Square Garden was the most memorable of his career. Chuvalo scored a knockout victory in five rounds. “I think he was ranked No. 4 in the world. I knocked out all the number 4s,” Chuvalo said. “I had trouble with the ones, twos and threes.”

In the years following his retirement, Chuvalo’s family life was repeatedly marked by tragedy. His youngest son, Jesse, became a heroin addict in the pursuit of pain relief following a motorcycle accident. He committed suicide on 18 February 1985, at the age of 20.

Chuvalo’s eldest sons, George Lee and Steven, were also heroin users and turned to petty crime. A robbery attempt in 1987 landed the two in prison. On 31 October 1993, George Lee was found dead at the age of 30 of an overdose in a Toronto hotel room. Two days after the funeral, Chuvalo’s wife, Lynne, died in her own bed after overdosing on prescription pills. On 17 August 1996, Chuvalo’s son Steven, 35, was found dead of a heroin overdose in his sister Vanessa’s apartment.

In 2013, Chuvalo’s granddaughter, Rachel Chuvalo, died of cancer. In an interview with the Ring, Chuvalo said, “losing her almost sent me over the top. I loved her like crazy, and she had her whole life ahead of her. She was only 30 years old.”

Having witnessed the dangers and potential consequences of heavy drug use, in his post-boxing career Chuvalo committed his life to anti-drug advocacy. Through his program, Fight Against Drugs, Chuvalo has made over 1,000 appearances to students and youth groups across Canada.

Chuvalo was made a Member of the Order of Canada in 1998 for “the strength and stamina he displayed during his many years in the ring” and for “his inner strength and fortitude when faced with several family tragedies.”

In 2011, a life-size statue of Chuvalo was unveiled in Ljubuški, Bosnia and Herzegovina. At the ceremony, Chuvalo said that the secret to his success as a boxer was his short neck and a “head made of Herzegovinian stone.”

George first got into boxing after seeing Joe Lewis on the cover of Ring magazine and he pestered his mother for a pair of gloves.

A Timeline of the 1970s Heavyweight Boxing Division Historical Chronology. One of the Greatest Eras in Heavyweight History.

George Chuvalo: Ali's Toughest Opponent Is A Warrior In And Out Of The Ring

George Chuvalo: Ali's Toughest Opponent Is A Warrior In And Out Of The Ring

On this day in 1966, George Chuvalo took a prime Muhammad Ali the full 15-round distance for the heavyweight championship of the world.